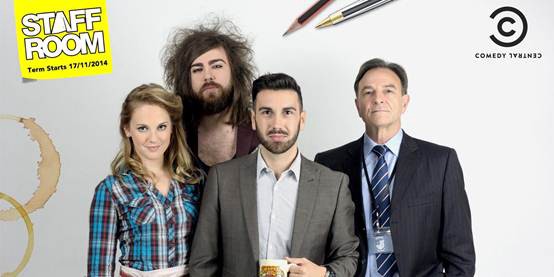 Staff Room tells the story of Ian Butterworth, a thirty year old failed filmmaker who has given up on his Hollywood dream to become a secondary school teacher. It’s Ian’s first day and things aren’t going to plan. He’s interrupted a sponsored silence, embarrassed himself in front of the girl he likes, been ridiculed by the Principal in an assembly and now has a psychotic bully on his tail. It’s just like being a pupil all over again. Yet despite his difficult start, Ian begins to learn a new lesson, one he didn’t expect, that perhaps starting over isn’t as bad as he initially feared, as friendships and even romance blossoms inside the staff room.

Staff Room is Comedy Central UK’s first streaming series. It's the story of hapless Ian Butterworth and his lothario best friend Julian Wentworth-Farlington, two teachers who are breaking every rule in the book.

Life Coach Leo Darwin appears to have everything. A thriving practice. A best-selling book. A beautiful wife and child at home. In reality, he’s being evicted from his office, his marriage is a mess, and his six-month old baby doesn’t have a name yet. His new client is about to have a breakthrough overcoming his fear of women. But the woman he’s fallen in love with is Leo’s wife. WATCH Darwin

Goodnight Burbank is a comical look at LA's local nightly news scene and the NSFW topics the anchors talk about off the mic. It is the web’s first full-length sitcom commissioned by Hulu. After premiering on the streaming service in 2011, the show was quickly picked up by Mark Cuban's HDNet cable channel.
Scroll back to top